There are a number of reason why drivers are hesitant to buy electric vehicles, not least because of the price, range and worries about the lifespan of their batteries.

New research has found that UK motorists have an underlying list of concerns about their safety, not least in adverse weather conditions - a truly British worry.

Incredibly, almost one in five of licence holders polled by Korean car-maker Hyundai said they didn't think electric cars were safe to use in lightning storms.
That's not the only safety fear some Britons have about electric passenger vehicles.

A survey of 2,000 petrol and diesel car owners revealed that almost a quarter would not feel safe charging an electric car.

This follows a poll of plug-in vehicle owners earlier this year that reportedly found that 74 per cent who charge their cars at home are risking electrocution and fires.
The practice is widespread despite nine out of of ten owners saying they knew that home extension leads should not be used outside.

Respondents to consumer protection charity Electrical Safety First's survey of 1,500 EV owners, blamed a lack of public charging points for the dangerous practices, though the government has recently set aside additional funding to add more by 2024.

Electric cars still only make up around 1.3% of all new cars bought in the UK, but the volume of models available is growing. However, there are long waiting lists for the latest
Incredibly, it's in the capital - which has the most owners with some 20,000 electric cars in London - where fears are highest regarding zero-emission driving, the new report found.

In comparison, just 11 per cent of people in East Anglia were worried about going out in an electric car in the same conditions.

Hyundai conducted the myth-busting research as society looks at ways to reduce its carbon-footprint - with the automotive sector already investing billions of pounds to bring more electric vehicles to market, helping to manage the transition to a zero-emission motoring future.

Despite many misconceptions by drivers, latest figures from the Society of Motor Manufacturers and Traders show that demand for pure electric vehicles has soared by 122 per cent in 2019.

That said, battery-powered models still only represent a small fraction of all new vehicles purchased by Britons.

Some 1.3 per cent of all new cars are pure electric, however this figure is only going to increase as manufacturers develop improving technology and the government continues to clampdown on air pollution levels. 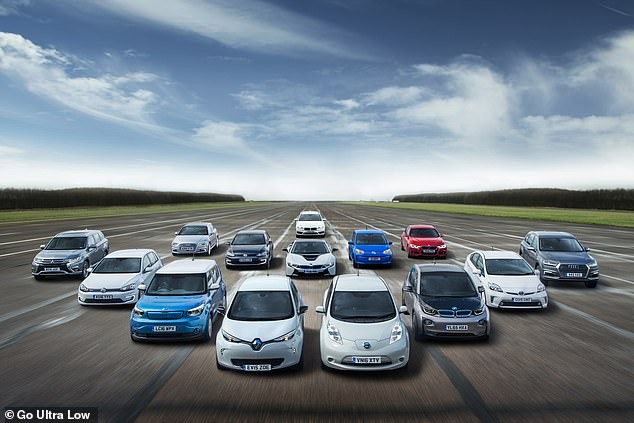 Sylvie Childs, senior product manager at Hyundai Motor UK, said: 'It's been fascinating to hear about some of the misconceptions that people still have about electric vehicles.

'We've all been told you don't mix electricity with water, but when it comes to EVs there's absolutely no extra risk of driving in a lightning storm - they are just as safe as a petrol or diesel car.'

Childs said range anxiety should also not be a concern for those considering making the switch, with the average Briton covering around just 20 miles a day, around 140 miles a week - well within the remit of what the latest EVs can manage before needing to be charged again.

'When electric cars first came out the range was an issue we had to tackle, but these days you can get almost 300 miles on a single charge and this will increase further in time,' she commented.

Hyundai's electric-car myth buster
In an attempt to quash other concerns about electric cars, the car maker has listed the 10 most common myths about plug-in vehicles.
Here's what Hyundai - and we - have to say about them:

1.I'm worried about range anxiety
Hyundai said: Don't panic. A typical electric vehicle (EV) covers between 100 and 200 miles on a single charge and even longer on some models with ranges of more than 300 miles. Hyundai's Kona Electric can actually go as far as 279 miles with one charge.

We say: While this is true, the real-world ranges of electric cars can be someway off what the manufacturer's marketing tells you. What Car? conducts a Real Range test on plug-in models and finds they all fall short of their claims. The Kona is one of the best, though, with a real range of 259 miles - 20 shy of the 'official' figure used by Hyundai.

2.I'm worried I won't find anywhere to charge
Hyundai said: No need to be. There are currently more than 14,500 public charging points in more than 9,000 locations in the UK and the network is growing rapidly.

We say: There are more electric charging points than petrol stations now. Most are reliable, though the network of motorway services chargers have often been blasted for a lack of dependability. The Government's pledge to have 5,000 rapid public chargers by 2024 means the infrastructure is going from strength to strength.

3.Electric vehicles are too expensive
Hyundai says: Think again. With more and more affordable and competitive options and fewer moving parts to fail or need replacing, EVs are in fact cheaper to run than conventionally fuelled vehicles.

We say: Electric cars are certainly much more expensive to buy - you're looking at a significant premium if you want one over a petrol or diesel equivalent today. For instance, a Hyundai Kona with a combustion engine costs from £17,505, while the Kona Electric is £35,100 - so almost twice as much.

Manufacturers are struggling to produce enough to cope with demand, meaning long waiting lists for some of the latest examples.

Also, electric cars are not that cheap to run due to high premiums linked to the pricey cost of replacing batteries damaged in crashes.

And then there's the fact the government has cut the grants to help drivers buy pure electric vehicles, trimming it back from £4,500 to £3,500 a year ago.

4.Electric vehicles are too slow
Hyundai said: Not true. Instant torque delivery means EVs can accelerate just as quickly and if not much quicker than their petrol or diesel counterparts. For example, Hyundai's Kona Electric can accelerate from 0-62mph in just 7.9 seconds.

We say: There isn't a sluggish electric car on sale. They deliver instant torque, so even the smallest vehicle - like the Smart ForTwo EQ - will take off from the lights with rapid acceleration. Various YouTube drag race vidoes show Teslas wiping the floor with Lamborghinis and similar supercars in sprints over a quarter mile.

5.You can't take an electric vehicle through the car wash or drive in a lightning storm?
Hyundai said: Of course you can, we've all been told that you don't mix electricity with water, but when it comes to EVs its perfectly safe to use a car wash and there's no extra risk of driving in a lightning storm.

We say: Car makers have taken all the relevant steps to ensure batteries are fully encased so water can't penetrate.

6.There's not enough choice in the market
Hyundai said: The electric car market is expanding rapidly. In fact, Hyundai currently has the largest e-mobility fleet in the world including the latest in electric, hybrid and hydrogen fuel cell vehicles.

We say: Electric cars are coming thick and fast. Volkswagen has promised to have a full range of battery-electric vehicles over the next decade while most manufacturers like Volvo will have plug-in variants of every model in their line-ups very soon.

7.Electric vehicles' batteries are adding to the landfill crisis?
Hyundai said: EV batteries can be recycled just like the batteries in petrol or diesel cars. EV power cells can be used to store solar and wind energy, or they can be broken down with their more-valuable elements reused.

We say: Breaking down an electric-vehicle battery isn't as easy as Hyundai makes it sound and it takes a level of expertise to extract the precious materials within. A recent study by Birmingham University found that the UK needs three dedicated 'gigafactories' to safely and correctly re-purpose decommissioned car batteries.

8.Electric cars might not be safe in a crash
Hyundai said: Rest assured that EVs undergo the same rigorous testing and meet the same safety standards required for petrol or diesel fuelled cars.

We say: Euro NCAP crash tested 12 hybrid and electric models in the last two years. Every single one of them received the highest five-star rating.

We say: Breakdown recovery providers can't tow an electric vehicle as this can do damage to the electric motors. That means they likely need to be loaded onto the back of a truck and transported to be fixed if they can't be repaired at the roadside.

10.An electric vehicle won't fuel my petrol head needs
Hyundai said: You won't be disappointed. As soon as you push down on the accelerator, the transition from stationary to speed is almost instantaneous.