The number of vehicles being used on UK roads without tax has fallen but still remains at record high levels since the paper disc was scrapped five years ago.

Around 1.6 per cent of motors on Britain's roads in 2019 are evading Vehicle and Excise Duty (VED), which represents an estimated 634,000 cars, according to new stats released by the Department for Transport.

While this is down from 1.9 per cent in 2017, it's significantly higher than it was before paper discs were abolished by the government in 2014 in a bid to save the DVLA millions of pounds ever year.

That decision appears to have monumentally backfired, though, with the DfT calculating that the government is £94million out of pocket a year due to unpaid tax. 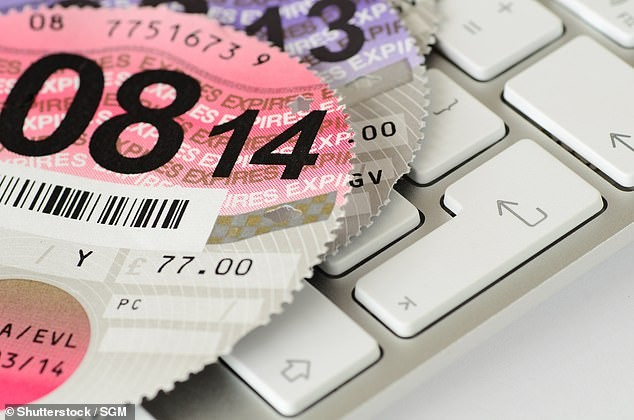 In the final year motorists had to display a valid paper tax disc - 2013 - just 0.6 per cent of vehicle owners were believed to be evading VED.

That worked out at an estimated 210,000 untaxed motors - a third of the number dodging paying for it currently.

When the paper disc was ended in October 2014, the government said it would eventually save the DVLA around £7million annually.

However, the increase in evasion since the car tax system was moved online has hammered the Treasury's pockets.

Some of the earnings through car tax also goes towards improving roads in the UK, which means drivers are losing out too. 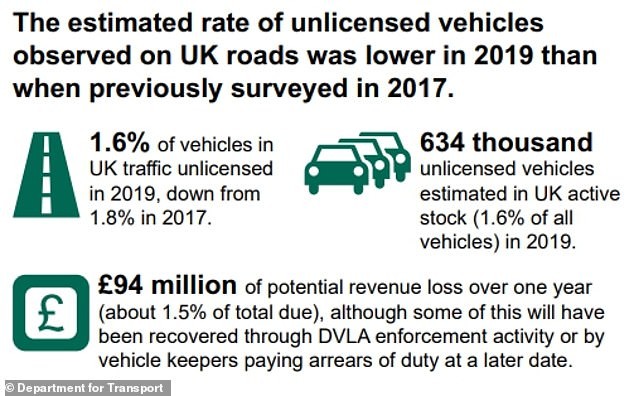 Commenting on the figures, Simon Williams from the RAC said: 'While it is good news that vehicle tax evasion has gone down, it is still significantly higher than it was before the tax disc was abolished in October 2014.

'It’s therefore hard to see that doing away with the tax disc has been good for ensuring as many vehicles as possible are taxed for use on our roads.

'This all means the Government is consistently missing out on very large amounts of tax revenue which from next year will be ringfenced for maintaining major roads in England.'

Closer inspection of DfT figures showed that evasion rates for private and light good vehicles - passenger cars and vans - was higher than the average, at 1.7 per cent.

The vehicles most commonly dodging VED are motorcycles, with a staggering 3.8 per cent evasion rate.

Though it did add: 'However, it is still considered to be a robust indication that motorcyclists have a higher evasion rate than the average road user.'

Regional analysis showed that the highest rate of VED evasion is in Northern Ireland, at 2.5 per cent.

This is followed by Scotland (1.8 per cent) where evasion rates are higher than average, and varying dodging levels across regions of England and Wales, between 1.5 per cent and 1.7 per cent.

More than half (54 per cent) of vehicles showing as not having tax have been unlicensed for less than two months, according to a review of data in June.

Incredibly, more than one in 10 (11 per cent) had been unlicensed for more than a year, but of this proportion more than a quarter of vehicles (27 per cent) were motorcycles. 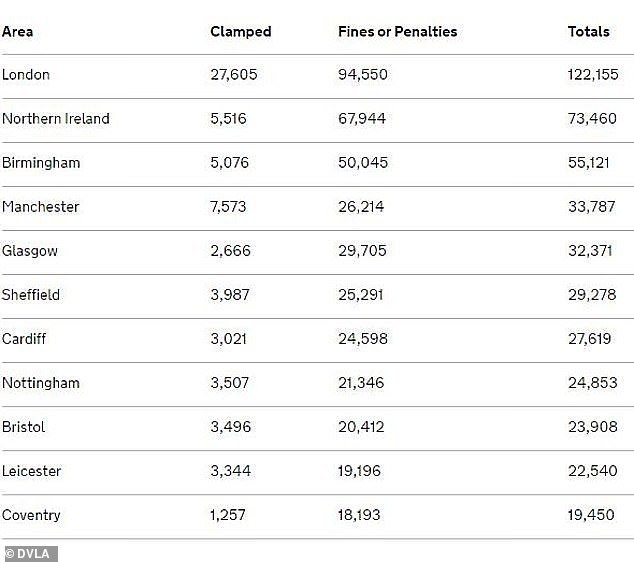 It listed 11 areas where a total of 464,542 enforcement had been carried out for attempts to swerve paying car tax throughout last year.

London topped the list with DVLA records showing that 122,155 total enforcements had been made for motorists attempting to evade paying their car tax in the capital last year. Of these, 27,605 had their vehicles clamped.

Some 94,550 registered keepers received fines or penalties after the online VED database had flagged their motor as not being taxed. Drivers may have experienced their cars being clamped and been fined or penalised.

Statistics show that London was at epidemic levels compared to the rest of Britain, having almost 50,000 more cases of enforcements due to unpaid vehicle tax than any other region.